Showing posts from January, 2017
Show all

Are You "All In" or Hedging Your Bets? 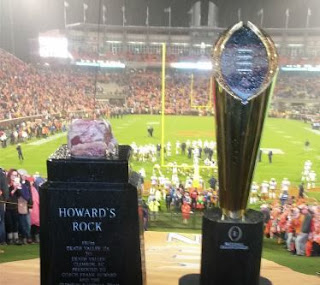 By John D. (Clemson University (Public), Flickr) [CC BY-SA 2.0 (http://creativecommons.org/licenses/by-sa/2.0)],  via Wikimedia Commons I would like to tell you a story.  But to do it, I am going to ask that you read all the way to the end, because it might not be what you think it is from the opening paragraphs. Now it is no secret that I am a Clemson fan.  So to say that I am elated over their 2016 National Championship is probably a serious understatement. For fun, I play Bowl Pick'em (where you choose the winners of each of the 41 college football bowl games) and try to get the most points to win the competition.  Each year I create two separate accounts.  With one account, I play against the people of my church.  With the other account, I play against my family. Not to brag or anything, but I destroyed my church family (man that sounds bad...maybe I am bragging a little bit).  However, by the time the championship game came around, I had already won the competition.
Post a Comment
Read more
More posts