Showing posts from July, 2017
Show all

Of Bible Translations and Heresy 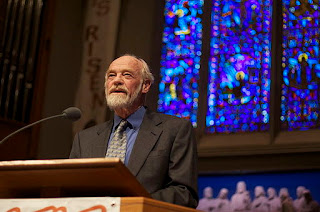 ...And it is sending a ripple effect through the Christian world.  LifeWay Christian Stores will be discontinuing the sale of the Message and Peterson's books upon confirmation of the statements made from his interview with Jonathan Merritt.  Russell Moore, the president of the Ethics and Religious Liberty Commission of the Southern Baptist Convention, wrote a response to this news worth reading.
Many pastors have been captivated by Peterson's writings.  Some use the Message "translation" as either a primary Biblical text or supplemental text to Bible reading.  His book "A Long Obedience In The Same Direction" is one that I had in my library, as I believed the title perfectly described what it meant to be a disciple of Jesus.  Many…
Post a Comment
Read more
More posts