Don't Believe Everything You Read...(not even this) 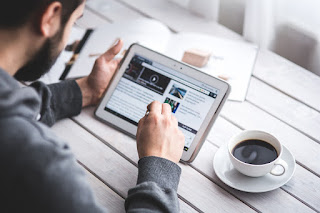 I'm about to get into trouble.  Maybe with a lot of you.  But for sure with some of you.

However, I can't stay silent anymore.  I have watched an entire generation of professed Christians follow the lie of eloquent writing believing because a person identifies as a believer (or a pastor) that it makes him (or her) one in any Biblical sense.

The digital age has brought with it more information to our fingertips and touch screens than we could have ever imagined.  If we want to find out about something, we just Google it.  Instantly, 63,498 articles pop up on the subject we just inquired about (give or take 15,438).  It is has the ability to be simultaneously an amazing gift and a destructive force to our faith.  The one thing that all of this information doesn't do is interpret whether the information is good or bad.

In this type of atmosphere, heresy is easily fostered and adopted.  You can see it on the web in all of the articles that claim that they are coming from a Christian perspective.  I mean, how are we supposed to be able to discern what truth is when one article claiming to be from a Christian says that Adam and Eve aren't real and merely allegorical, while another claims that a literal Adam and Eve are necessary for our faith?  If one Christian pastor says that LGBTQ people are to be equal members of the church, while another declares that unrepentant sin disqualifies one from being a part of the body of Christ?  If one Christian vlog is dedicated to show how evolution and the creation account in Genesis are compatible, while another vlog from a believer categorically states that evolution and the creation account cannot both be true because it strikes at the heart of the gospel?

The good news is that because we have the Word of God, all of us have the opportunity to know whether or not articles written by people truly line up with what it says (no matter who those people are...including me).  The bad news is that because all of this information is readily at our fingertips, no one really reads the Word of God anymore.  It's just easier to trust a blogger and a few quotes of Scripture that may or may not be found within the context of the passage and adopt those views as our own, especially if they line up with what we already believe.  Truth has become whatever storyline catches our eye or tugs at our heartstrings.

It's nothing new.  The early church faced heretical teaching in its infancy.  Paul would proclaim to the people of Galatia that if a person was preaching a different gospel than the one he had proclaimed to them, those people should be eternally condemned (Gal. 1:6-9).  John's first epistle is dedicated to the refutation of an early form of Gnosticism that had made its way into the church (1 John 2:18-19).  Jesus, Peter and Jude all spoke of false teachers and prophets that would and had come into the church (Mat. 7:15-23; 2 Pet. 2:1-22; Jude 3-5).

As we listen to the confrontation of Jesus with the Pharisees and teachers of the Law, we don't hear a soft sweet refrain, wooing the confused teacher back to the kingdom of God, but a loud condemnation meant as a warning to them and those who would follow their teaching that their teaching was perverted & hypocritical, their destination was hell, their ways were corrupt and Jesus, whom they rejected, was the only One who could save them...but they were unwilling (Mat. 23).  They believed in the promised Messiah, but according to them, He looked nothing like Jesus.

As it was with them, so it is with us.  Only one can be right.  That one is God, of course.  It is why John told the church he was writing to "test the spirits to see if they are of God" because there were false prophets in the church (1 John 4:1-6).  These tests were not just based upon whether or not someone gave you the "hebejebes" or "a good vibe" when you were around them.  There were actual theological parameters one had to meet that were tailored for the specific heresies invading the church.  If they failed the test of orthodoxy, they were considered heretics (1 John 4:3).  They were cast out of the church (1 Tim. 1:20).

This test of orthodoxy wasn't just for the nature of God, but for being part of His church (Mat. 18:15-17).  Those professing belief, yet continuing in sin were removed from fellowship both for the sakes of the ones they were correcting (that they may come back to Christ) and to the church, as a warning not to follow in their footsteps (an example of this can be found in 1 Cor. 5).

Today, such teaching is considered judgmental, hateful and intolerant.  Those who think that Jesus would be loved by the masses forget that it was the masses who killed Him because He testified that what it does is evil (John 7:7), though many of them thought they believed in God.

However, there are those who claim to be Christians (pastors, bloggers, teachers...etc), who have perverted a relationship with Jesus to include any feeling they happen to have at the moment.

They teach that Adam and Eve weren't real.

They teach that homosexuality is not a sin to be repented of, but rather a lifestyle to be celebrated.

They teach that the fellowship of believers, known as church, isn't important.

They teach that friendship with the world is the movement of God.

They believe that sin is irrelevant and can't be defined (other than being judgmental).

They believe that hell is here on earth, if it exists at all.

They believe a woman's right is carried into the decision of the life or death of the child in the womb.

They believe that accepting and affirming the unbeliever is more important than loving fellow believers.

They believe it more profitable to treat God's Word more like guidelines rather than the sacred word that it is.

And believing all of this...they still believe they are Christians.

If you have ever read any of my blogs, you will notice that I include a LOT of Scripture references when I write.  I do this because in the end, my words don't mean anything.  You shouldn't trust me any more than anyone else that you read on the internet.  To those whom I know, I pray that I have earned some trust, however, you should still scrutinize me to see if my teaching lines up with Christ's teaching.

However, teachers like John Pavlovitz, Rachel Held Evans & Rob Bell are leading a generation away from the truth.  Each of these are powerful, gifted writers (and in some cases pastors) who rarely quote the Scriptures and often allude to them out of context.  I have read many of their writings and heard the messages that they have spoke.  I also know that many believe the words that they say.  I see more and more in my feed quoting their articles and stories.  And if it is you, I point this out, out of love and warning.

Paul said that we are to demolish arguments and every pretension that sets itself up against the knowledge of God, and take captive every thought to make it obedient to Christ (2 Cor. 10:5).  A simple question I would like to ask all of you:  Can you biblically defend your views in the light of God's word or have the writings and the messages of the people you have followed become more important (this includes mine)?

False teachers were promised by Jesus long ago and continue to this day.  Our only defense is our knowledge of the Word of God.  We would do well to know what it says.