Learning to Use My Children's Gifts 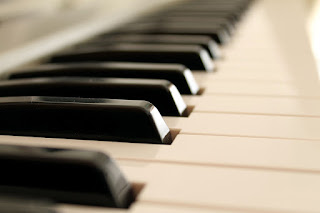 Went to the hospital today to visit a beloved member of our church.  My son was coming into town with me and knew this member well and wanted to visit too.

We went to the downtown hospital where my son had his surgery a few months before.  During one of our visits, we noticed that the hospital had a piano with a sign on it.  The sign basically said that anyone could use the piano, as long as they were not a beginner.  It was there to be a soothing balm to those who were recovering or going through a hard time.

I had seen it many times before, but never in use.  I mentioned to my son that it would be great to come back after his finger had healed and play some on the piano as a ministry to those in the hospital.  He agreed and we kind of left it at that....

After spending some time with our dear friend, who encouraged us with his Christ-like attitude amidst his situation, we found ourselves going down the elevator and the thought of that promise in the back of my mind.  We were already at the hospital.  Could there be any better time than this?

Over the last few weeks, my son has been busy composing some of his own tunes that sound really good.  As he puts it, "I have a lot of time and a great teacher."  He had just perfected one of his pieces.  The timing truly couldn't be any better.

While every father would take every chance to display the talents of their son or daughter for the whole world to see, that really wasn't the goal I had in mind...nor the one that I wanted my son to see.  I wanted my son to see that the gifts that he has are God's key to unlocking the door to ministry in other people's lives.

Nervously, my son got behind the piano and began to play his beautiful tune.  As he played, people passed by, turning their heads as the notes reached their ears.  Some paused in the hallway to listen for a few extra seconds before they resumed on to their destination.  A man using a walker sat in a chair with his friend next to the piano.  He finished his piece to the praise of his small audience, glad that a hospital official didn't come to kick him off the piano.

We stood before the two gentlemen there for differing needs and we talked.  One was there for knee surgery.  He explained that he was teaching his 4 year old daughter how to play the piano.  He showed my son some of the basic techniques that he had shown her.  After our impromptu concert and dialogue, we shared that we were Christians and asked these new friends if we could pray with them concerning his knee.  Gladly, they accepted.

While I prayed this time, my son mentioned afterward that he was going to ask to pray for them too.  However, since he got to pray for our church friend above, I thought it was only fair that I lead the way this time.

We both left the hospital thankful to God for the morning that we had ministering to the needs of others.  We were amazed by God's orchestration of events that brought us to a place where God could use my son's gifts to encourage and outreach to others, in the name of Jesus.  We talked about it for about 45 minutes straight.  Everything just kept coming back to how God used us today to reach out in His Name.

God's has gifted every one of us.  Those gifts that we have, God wants us (and our children) to use as barrier breakers to those who have yet to know His Son.  Those gifts are often honed within the fellowship of believers in conjunction with a vibrant faith.

As a father, I am learning how to use the unique gifts my children have to reach out to a hurting world for Christ.  My prayer is that they will continue to do this their entire lives and that God will use them in a mighty way...as He used my son today.

So whatever gift you have...use it...use it as a barrier breaker for the glory of God, then teach your children to do the same.  If you do, it won't be long until you have awesome encounters like this.
Christian Living Witnessing