Hope for the Faithful Christian 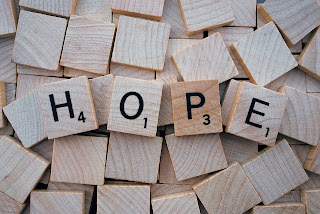 Being faithful to Christ in a society of growing hostility toward all things Christian can give believers reason to despair.  Since the passage of same sex marriage, there has been a blow back against the Christian community, and even within it.  Many who have called themselves Christian have abandoned Christian brothers and sisters to stand with family members, friends and acquaintances who identify as LGBTQ.  Labels of intolerance and bigotry await the faithful believer who would call for an acknowledgment of sin and repentance of that sin as precursors to true belief in Christ.

However, our message is no different than that of the very first believers.  Remember Peter's response to the crowd at Pentecost, "Repent and be baptized, every one of you, in the name of Jesus Christ for the forgiveness of your sins.  And you will receive the gift of the Holy Spirit.  The promise is for you and your children and for all who are far off--for all whom the Lord our God will call."  With many other words he warned them; and he pleaded with them, "Save yourselves from this corrupt generation."  Acts 2:38-40

In Peter's day, the offense was that of preaching in the name of Jesus (see Acts 4:18; 5:28-32).  Today the offense isn't Jesus, but an acknowledgment of sin and repentance of that sin in order to follow Him.  What many who proclaim that people don't need to repent in order to follow Jesus do is destroy the reason for which Jesus died by making "sin" a meaningless term.  They end up preaching "a God without wrath [that] brought men without sin to a kingdom without judgment through the ministration of a Christ without a cross."* ...all for the sake of peace and the twisted thought that they are in any way sharing the good news by keeping people trapped in their slavery to sin.

Speaking up in Peter's day got him ostracized from the greater community around him, thrown in jail, beaten and eventually martyred.  Those who would say that Christians don't face persecution today would point to these things in the Scripture and say that we are not facing them in America today, so quit your whining (and while you're at it...stop being so judgmental).  But they forget that the first persecution of the early church wasn't that of beating, but of simply telling those sharing the good news of Jesus Christ to shut up (Acts 4:18).

If believers deny their calling and simply shut up about sharing Christ they can be assured that they will never face a growing cost for sharing that gospel of Christ.  As the pressure mounts and the sharing of Christ becomes more personal with each family member, friend and co-worker offended by such a message, our temptation is to take the offense of Jesus our of our lives by never mentioning Him and only living for Him without words or changing our message to that of the prevailing culture to make Jesus more palatable (and thereby denying Christ altogether).

Trust me when I say, I feel that same pressure everyday.  Like you, I have succumbed to the idea of not mentioning Jesus in high pressure situations for the sake of peace.  I want to keep relationships in the hope that those who do not know Jesus may come to know Him, and those who have seemingly walked away from Him may be brought back.

However, one question haunts me when I take that approach:  How exactly am I hoping that God will show them the truth and share the good news of that truth, if I, a servant of Christ, am afraid of speaking that truth with the opportunities that He has given me with these people (be it family, friends or co-workers)?

We are so afraid of them (no matter their stature in our lives) that we have no true confidence in Christ.  And this is what we must change to see the power of Christ in our lives and our society around us.

Remember that offensive message of Peter's on the day of Pentecost?  The message that he would continue to preach that would get him thrown in jail, told to shut up and eventually killed for his faith?  Here is how that passage ends:  Those who accepted his message were baptized, and about three thousand were added to their number that day.  Acts 2:41

Not only were 3,000 saved that day, but Peter and John would see the healing of a crippled beggar and the coming to faith of another 2,000 people.  You see, by shutting up, we miss the persecution, but we also miss the greater blessing that comes from the salvation and restoration of those whom we love to a relationship with Jesus Christ.

So let us be bold for the name of Christ, for He, and He alone is our hope.  If we are faithful, He may also become the hope of those whom we share with...and we will get the side benefit of seeing Christ in all His glory.  After we are able to see that, how will we ever be able to shut up about the great things He has done?